I must admit, I've been a bit of a tech geek for most of my life. When I was somewhere around 8 years old my uncle gave me his old Vic 20 computer, and I literally spent hours programming a "video game" by typing BASIC code into the computer.  When I was in my late teens we became an Apple family, and I was fascinated with playing with rudimentary video editing, photo editing, etc.  It was when I first started into ministry in 1996 however that I began to see that there was more to technology than just fun & games.

When I first began working at Cedarwood, the only real ways to keep up with campers from the summer was to write letters or talk on the phone.  However, and I didn't know it at the time, North America was really on the cusp of a communications revolution. For the first time email addresses, which had been basically limited to business people & university students, was suddenly becoming available for free through services like Yahoo & Hotmail. As well, there was a new phenomenon starting to take hold called Instant Chat. My experience with this began with ICQ, progressed to Yahoo Messenger, and finally to MSN.  Yes, I found it convenient to begin to talk to my friends without calling them, but it also began to profoundly change the way we kept up with our campers from the summer. Suddenly there was a simple way to continue friendships when getting together was either inconvenient or impossible.

In 1998, I made the transition to year round office staff at Cedarwood, and one of the first projects I was given was to basically design a web page for our summer camp.  Our director had put together a very simple page, more for his own use, but this was to the the first page that was actually advertised to the campers with the intent of them using it as a resource.

Unfortunately I don't have a copy in my possession of that very first web page, but I was able to track down a copy of our page from a few years down the road- still quite early in the http:// world. 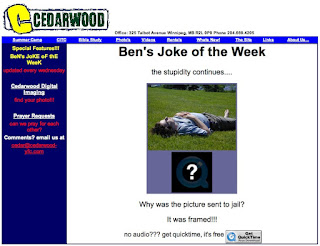 I picked this specific section from the site because it illustrates a passion I had for our entire web "ministry."  No- not cheesy jokes... but for the web to be a tool to bring campers in and share God's love with them in simple practical ways.  In this case, it involved an audio file of "Ben's Joke of the Week." I know it's hard to imagine, but this was actually fairly cutting edge technology at the time. YouTube was still a few years away from creation, most people were on dialup, and compression technologies were sketchy to say the least.  Still however, we were able to make something unique that grabbed the campers attention, and also encouraged them to look around the site a little bit further. It was then that they would find bible studies, Cedarwood programming updates, and other things placed strategically to remind them, even in a small way, of God's incredible love. THE JOKE AUDIO FILE (yes... there was a laugh track)

Digital communication has progressed faster than it's possible to even wrap one's head around in the last number of years, and honestly, if there has been a new technology out there, I have tried to make use of it. From our Cedarwood YouTube Page, to starting the Cedarwood Facebook Page, I have tried tried to take advantage of the current technology of the day.  With that in mind however, there's a couple of principles that have been important to me. 1. These are only tools that can be used to assist in our ultimate purpose of sharing the Gospel of Jesus Christ.  2. These are not a replacement for personal interaction, but should be designed to encourage personal interaction.

The other day I discovered a new technology. It's been around for awhile- but I must admit that it just missed my radar, and so when I discovered it I was excited by the possibilities.  QR Codes- little graphic boxes of well... strange boxy squiggles... that can be read by a smartphone (android, iPhone, crackberry) or similar device (ie. iPod touch w/camera), and that contain an encoded message- whether it be a phone number, an email address, a test message, or a link to a website.
Ever since making the transition to full time at NKMB, I have been in charge of overseeing the upgrade to our webpage, and so this immediately grabbed my attention as something that could fit together.  Wouldn't it be great to have a QR Code on the Missions Bulletin board that sent your device straight to our missionary information page. Wouldn't it be neat for someone to scan the QR code on a bulletin and be taken directly to the .pdf version?

Like anything new, I have to take a moment to think and pray about how to use it in the most effective way, and to remember to follow the principles that I have tried to let guide me in the past.  Am I using this to share the Gospel, and am I using this to encourage our personal relationships in a way that brings Glory to God?

So that's my technology rant :)  I'll leave you with a QR Code leading to a little surprise..... 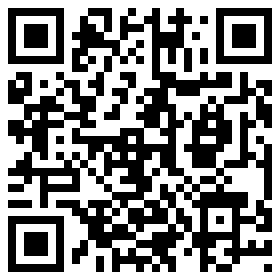 Wow. I must say you had me intrigued so I went to the other room and got my crackberry and had to try and remember how to use the reader as I have never actually had cause to use it...but it was worth it. That new song of your in incredible! That you for sharing! :) Graham