Honestly, I couldn't help but laugh. There on the floor lay my old espresso maker, one that had served up literally hundreds of espressos and cappuccinos, split open in a puddle of water. 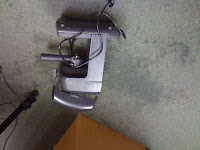 Just a few minutes before I was still in my state of panic. You see, I had promised cappuccinos, and as far as I was concerned they were going to happen no matter what.  It kind of all started back a few months ago when I decided to try a new concept for our bi-monthly worship nights at church. Instead of growing, numbers were dwindling, and I knew something had to change - the main thing being the location.  We moved our Exalt evening into a much smaller room in the church, rented a sound system and lights, and served up cappuccinos and lattes along with some tasty snacks.  The event was a success in that a very good number of people came out and the feedback about the evening was very positive. I was excited to make it all happen again. (if you notice a problem with what I just said, keep reading cause you're right)

I actually thought I had covered my bases better than at any time before for this particular event. I had a backup in place to train in case my resident barista fell through, and I had my band and music picked out far ahead of time. However, as the weekend approached and little things began to fall apart, I found myself more and more concentrated on the details. Sadly, the biggest detail in my mind was the cappuccinos and whether they would happen.

By Sunday all of my planning regarding the caffeinated beverages had fallen through completely. Although I had a couple of willing servants ready to attempt to learn the art of cappuccino making in the short hour before the event, I had resigned myself to running back and forth between sets to serve up cappuccinos.  Knowing that something was definitely wrong in my heart, I went home for lunch, fell down on my knees in my living room, and prayed for mercy....

As I prayed, God began to remind me of a couple of things:
1. I was worrying about the least important thing and forgetting the most important thing. Like seriously, I was worrying about serving up coffee. I have friends going through terribly trying health issues. I have other friends struggling with addictions, loss, heartache....  and I know many people I care about who are walking far away from God right now... and yet I was worrying about coffee. Above all, I was forgetting about the purpose of the evening at hand. It was to glorify God, and for no other reason.
2. I was trying to do it all on my own. Yes of course I had help lined up, but I mean beyond that. I was trying to make this evening of "worship" happen on my own terms, and merely coming to God to ask for His assistance in making my dreams a reality.

The reminders were strong and led me into a very hard but ultimately good time of prayer for the evening.  Being the stubborn person I am however, I was still convinced I was going to make the cappuccinos happen. (I was just going to pretend that I wasn't worrying about them) I was now back at church, carting over sound stuff to the event venue when I stopped by my office to grab my trusted old espresso maker to bring it along with the rest of the equipment I had stacked on the cart. I don't even know how it happened, but as I picked it up, it literally just dropped out of my hands from about 4 feet off the ground and shattered on the floor. It was strange, cause' besides the puddle of water it seemed like maybe it wasn't too badly damaged, except for this one strange looking piece I'd never seen before lying beside it. As I tried to figure out where it fit, I realized that the top had split open, the piece had shot out from the inside, and the top had closed again! In other words, the machine was done... the dream was over... and as I said before, I began to laugh.

In all my stubbornness, the only way that God was going to get me to stop and truly remember what was important was to take away my ability to do what I wanted to do. The broken machine lying on the floor meant that there would be no cappuccinos, and suddenly I was free from my own wants and desires for the evening and free to follow what God had planned. The best part was, I knew it immediately. I can only think of Luke 10:38-42 and Jesus' response to Martha as she pleaded with Jesus to send her sister Mary away from Him to the kitchen to help. "My dear Martha, you are worried and upset over all these details. There is only one thing worth being concerned about. Mary has discovered it, and it will not be taken away from her."  Mary was sitting at the feet of Jesus listening to His every word.

ps. for those who are concerned about my physical well being after destroying my espresso maker, don't worry! God was very gracious to me in that it was my old machine that had been sitting in a box in my office for the past 8 months. A newer and better machine still sits safely on my coffee counter at home...

Just call me Psmith - the P is silent said...

Thanks for that 'gentle reminder', Ben. I laughed when you mentioned 'pretending not to worry', like we can hide that from God. Why do we do that?! Well, in the end, I really want to be a Mary. The other stuff will just have to wait.