On Karate... and Community

I don't tend to make much of milestones, but I was surprised to realize that as of somewhere this week I have now been on staff at my church for 4 years. It seriously seems like yesterday that I was meeting with the search team discussing my application, and although the time has flown by I also feel like I'm only beginning to get an idea of what I'm actually doing and how to do it.  That however is an aside because I'm celebrating another milestone this week as well. Our Karate ministry is 1 year old.

Karate? Ministry? In a Mennonite Brethren church? I suppose I should share some background, and it all started somewhere in July 2012 when I met with a member of our church about a crazy idea he had. You see, he works for a local christian ministry organization and his coworker happened to run his own karate dojo in south end of the city. Our subsequent meeting with Sensei Deo seems like an eternity ago mainly because of the great friend he has become. Here was this congolese man with a heavy accent sharing with me the peace emphasis of the sport of karate while trying to see our church would be interested in joining with him in setting up a christian based dojo.

There were a few things that stood out to me that made me incredibly passionate about the possibility of a karate ministry from the very beginning. One was the fact that it would be open to young and old. Another was the clear peacemaking foundation of this style of karate, Meibukan Goju Ryu.  Finally, it was Deo Sensei's own clear passion for the sport as a Christ follower and for leading it as a ministry. After checking to see if this was something I could just go ahead with (and it pretty much was) I decided to dive right in and book some rooms in the church, put up a few posters, and give things a try. Here we were, for our first class a bunch of guys between the ages of eight and fortysomething in a room learning karate in sweat pants. By the third week we had our uniforms, white and crisp, and the real fun began. 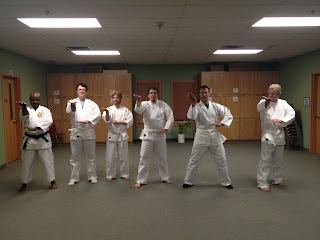 The year had its challenges. Having been booked last minute on a night of the week that was often busy we were moved from room to room and yet our new little dojo continued to grow and grow. One person this week, another couple the next, a wife, a daughter, a friend.... and soon we began to realize that we had a really cool community coming together. It was midway into the year that a few of us decided to up the ante ministry wise, to move from just a community gathering into a time of actually sharing the gospel, and with the encouragement of our Sensei I began sharing a weekly devotional during our water break. Around this time as well a friend and I had the opportunity to attend a training seminar at another local dojo. It was an incredible privilege for us to experience the warmth and hospitality of the greater Goju Ryu community while representing a dojo with Christ as its cornerstone.

In March tragedy struck as our Sensei's young niece died after what should have been routine surgery. Here once again however I was struck by the love and care of the karate community as my friend and I attended the funeral, and it was also my first real introduction to the Congolese community that makes up much of our Sensei's other dojo (and his family). Soon after we made our first trips out to the southend of the city to train with them and were welcomed warmly. More and more often our Sensei would bring his family and students from his other dojo to ours and we would travel to theirs, and I would say that this culminated in a joint grading evening we held at our church with members of both dojos. It was an incredible and beautiful joining of our communities both during the grading and in the celebration afterwards. 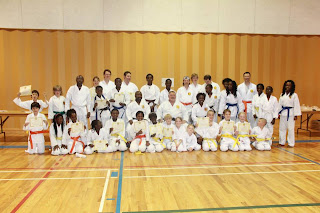 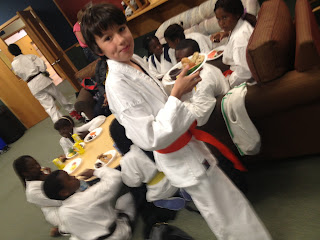 In mid-June we were blessed to have Mondays open up for us with the ability to use our incredibly suitable church gym for our lessons and even throughout the summer we have continued to grow. With an exciting new season ahead, we were given a surprise once again as our Sensei had found out that he would be required to re-locate out of province for the year as he began his PhD studies. Through his diligent preparation he was able to secure assistance in instructing us this year as he is away (although thankfully he will be able to join us occasionally.)  The awesome part is that through this the community continues to grow and our joy with it. This evening as I looked around the very big circle around me as we sat down for our devotional I shared the story of the very first christians from the book of Acts and how they built their community. I shared the challenge to honour God by caring for others instead of choosing to honour ourselves. As we prayed I thanked God for the gifts He has given us, and then after I was done we got up and celebrated once more as some of us moved up in our belt rankings once again. 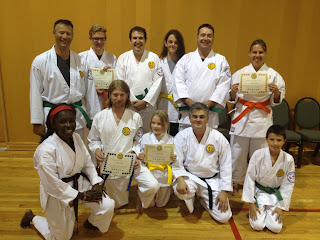 So, what are our dreams for the future? What will this ministry look like moving forward? For now, it will continue to be a ministry of building Christian community while encouraging respect, discipline, peacemaking, and a healthy lifestyle. We will continue to share scripture based devotionals from week to week and we will continue to care for each other. As some of us move closer to being able to offer instruction ourselves, the greater dream is to move intentionally deeper into our surrounding community where there is what I perceive to be a very strong need for this kind of activity to be offered while sharing the love of Christ.
Happy 1st Anniversary to the North Kildonan Meibukan Goju Ryu Dojo - a family that I am blessed to be a part of.