The old identity is gone.

It was only as I was driving home tonight that it hit me why I had been so nervous. I should have known it, but when you are in the thick of things sometimes the mind doesn't really see the obvious and so I just chalked it up to being nervous for the sake of being nervous. However, as made my way home it all came flooding back. In my life I have had many identities so to say - son, student, coworker, mentor, pastor, friend; but through all that one that has stuck with me in a much more personal way has been that of being awkward, uncoordinated, and generally un-athletic.

Field day in elementary school and Junior High was always a time of great anguish for me. It was the day every year that I got to show in front of everyone how I couldn't run properly, jump a hurdle, throw or catch a ball, you name it. When I was in grade 7 I played baseball because my parents thought I should be in a sport. It was unfortunate that I was afraid of the ball flying at me, whether it was from a pitcher or from a bat hitting it into the field. I was even terrified of those silly games you play at camp because they still seemed to at least involve some sense of physical ability and as far as I was concerned I had none at all.

As I grew older I began to embrace this identity and have fun with it. I'd make jokes about my lack of physical abilities and even try to use it as a way to encourage other young people who suffered the same apparent genetic fate I did. However, I'd still try to overcome it and things would always go wrong. I'd try to run, and my asthma would kick in. I spent a year lifting weights and then I tore a muscle lifting a silly drum riser and watched all my progress disappear. Come to think of it, I don't actually know what I was thinking when I joined Karate.....  besides maybe some good fellowship time with friends and a fun diversion from the busyness of life.

Things started to change about a month ago after a period of craziness in the office where I honestly didn't know whether I was coming or going. I finally started to buckle down and learn one of the katas... a system of moves in Karate that must be memorized. I learned the easier one, but the more difficult one always seemed out of my reach. It came to a head last week when our Sensei was evaluating us to see if we were ready for our transition to the yellow belt and I was sure I wasn't ready. Out loud I would say that I just needed more practice and that I was sure I'd get there next round, but inside the old identity still stuck with me. "You won't actually do this. You'll give up. You are not near coordinated enough to ever pull this off." Then that evening something stunning happened. As our Sensei handed out the letters of promotion, he called my name. My Sensei picked me.

This last week has been such a battle because on one hand I was chosen, but on the other, I was still convinced that my identity would never change. As much as I practiced and practiced there was a voice inside of me saying that I would never really do it, that my identity was never to change. I realize now it's the same voice that tells me that my battle with temptation and disobedience to God will never change either. I try and try to do good (much like Paul writes in Romans 7) but I just can't ever get it right and I feel deep inside like there is no hope.

In 2 Corinthians 5:17 we read a powerful promise; "This means that anyone who belongs to Christ has become a new person. The old life is gone; a new life has begun!" What's important to remember is that Christ chose us first.... "But God showed His great love for us by sending Christ who died for us while we were still sinners." - Romans 5:8.  Just like my Sensei picked me, I must remember every day that Christ chose me, and not only did He choose me, but He gave His life for me. It's a powerful powerful thing that I still struggle to wrap my mind around. Even more amazing to me is the promise with that  that those who belong to Him have become new persons....

This evening at 37 years old I received my yellow belt in Gojo Ryu Karate. While to some the first belt may not be the biggest deal, to me it is proof that that old identity that I carried sometimes like a burden and always like it was forever has ceased to be. By receiving a single certificate my identity has changed - the old life has gone and a new life has begun. How much more has a new life begun from the moment God lead me to accept His forgiveness and move forward as a new creation in Him. 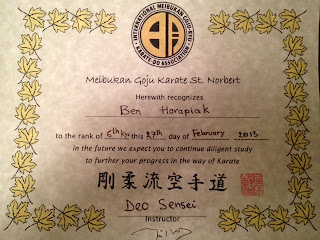 Amazing story, Ben! Thank you for sharing! Anything is possible with God.