It all began with an online cartoon about a beleaguered bookmark factory and its helpless employees as they argued over who emptied the water cooler.  Tyler and Jordache had decided to adapt it into a summer comedy, and they were sitting in the program office discussing who would play the different characters when the question came up. "Who would play Winston?"  Winston you see really has no lines throughout the entire skit until the very end after he is falsely accused of taking the last cup of water, with disastrous repercussions for his so called career.
The part called for this character to scream out in a whiney voice, "But I don't even drink that water... it tastes like plastic... plastic!"  Just for fun I scrunched up my face and made the whiniest voice I could and said the line, and instantly the part was mine.

We did the comedy a few times in the summer of '06, but a number of the cast didn't quite catch the concept of the straight man, a key to comedy.  In other words, they all tried to be funny instead of following the very dry (but hilarious) skit.  At one point, dear Nathan turned a table over on me onstage just before I could utter my only line.  Summer 2009 was chosen to redeem the comedy, and the more people stuck to their lines, the funnier it was.  However, what I want to detail more than anything is the transformation that happens inside when one becomes "Winston."

The Winston of 2006 and the Winston of 2009 was basically the same- Cedarwood is  blessed with a wonderful prop room and I was able to find the tightest, ultra conservative, pompous, tackiest suit to wear for the character.  Besides my hair being a little longer and the addition of some nifty glasses, the character that was made in 2006 continued on.  It's funny, because the transformation always began with the hair.  Slicked back in a sickeningly meticulous way, framing my facial expression detailing the horror of experiencing life's little moments.
The vest and suit jacket completed the deal. In '06 some tight suit pants accompanied the wardrobe, but alas by 2009 this was no longer an option due to my lack of regular workouts at the Y (but we shall not speak of that....).  However, once the wardrobe was in place, it was like a transformation took over my mind.  Suddenly the greens seemed duller, smiles were subdued, and the world took on a pall of uncertainty. Yes, Winston was a sad little man with a sad little job, who had a sad little ending at the bookmark factory.

I once thought about wearing the costume for a day at camp, but I quickly realized there was the distinct danger of going emo at one point and I decided that Winston's place belonged purely entrenched in the magic of After 8, where magical joyous things just seem to happen every night on stage and in the hearts of those who are a part of it.  It was my joy to quickly escape the grasp of Winston backstage following the comedy as I messed up my hair, took off the suit, and listened to the belly laughter of young people in the crowd.  Suddenly the greens were greener again, the smiles more radiant, and the world had a glimmer of hope. Come to think of it, these were probably not as much symptoms of escaping Winston, but of being at Cedarwood in itself.  I expect I'll continue to have that experience every time I visit and share in the wonder of an After 8... 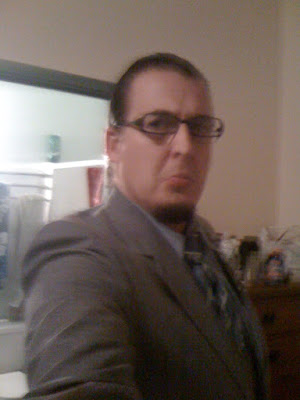